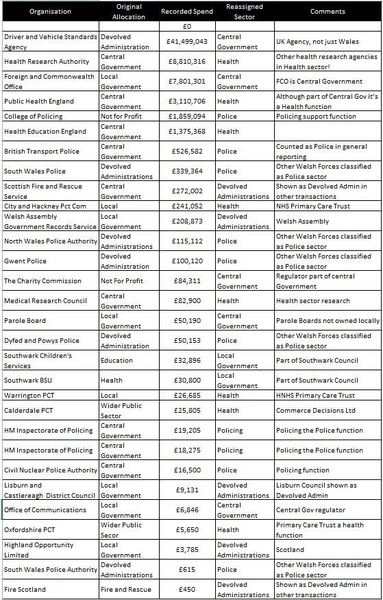 G Cloud has been something of a revelation in terms of reporting on Government spending, showing what Government has been spending on (Infrastructure, Platform and Software As A Service and Specialist Cloud Services). But figures cannot be necessarily taken at face value!
As much as 6% of spending since the launch of the online catalogue has been allocated to the wrong Government sector. For example the Local Government sector includes expenditure by the Foreign and Commonwealth Office, inflating the recorded spend by Local Government by £7.8m. The Driver Vehicle and Standards Agency - with a UK remit and an Agency of the Department of Transport is reported as being in the Devolved Government Sector, a sector specifically for purchases made by the respective Governments of Wales, Northern Ireland and Scotland.

And the accuracy of recorded revenue within the 4 Lots too could be significantly improved with suppliers uncertain which of the lots they should report sales as falling in to. SCS is particularly abused, and appears to be the "catch all" Lot. Lot 4 includes revenue for SaaS licences and Hosting (IaaS or PaaS). This inflates SCS reported figures - to the detriment of other Lots.

Already there is a suspicion that the recorded spend through G Cloud is under reported, either through a deliberate desire to avoid the GDS levy on revenue or a lack of understanding of the reporting requirement. G Cloud revenues not only provide an albeit small revenue stream for Government but provides the transparency for the accountability expected of Government expenditure, especially important at times of reduced and constrained budgets. In addition it enables "self-policing" - allowing Government to see the impact and the extent to which its own strategies and policies are being followed by the Public Sector.

Ensuring that revenues are reported, and improving the accuracy of those figures, does need to be addressed for citizens and Government to get the maximum value, and of course revenue (the levy), out of G Cloud. The question is as to when and how the reporting issue intends to be tackled, and by who?